The Trip From Hell

Thanks, Mom, for continuing to update everyone.
The wireless Internet has been hit and miss, but I've decided to take a stab at posting.
Let's recap our trip so far:
1. Shattered windshield.
2. Murdered turtle.
3. Demolished water pipe at Amarillo KOA.
4. Spent $1200 getting the trailer functional.
5. Spent $800 fixing our trusty pick-up.
6. Got scolded by assholes at Colorado Springs KOA.
7. Still being monitored by assholes at Colorado Springs KOA.
8. Lewis developed masses in his chest. (Turned out to be severe allergies.)
9. Found a house. Take possession Tuesday (that's our silver lining).
My friends, it has been hell. I have cried quite a bit. Scout has experienced a lot of anxiety. But we've made it.
And Tucker has been awesome - happy, joyful, and lovely. He has recently decided that all of the dogs are named Daisy. He points to one of them (rarely the real Daisy) and says it very distinctly. When we try to correct him, he asserts that it is, in fact, Daisy.
I've tried finding a job, but so far that part has been much harder than finding a house.
But I'm already checking CraigsList for chickens and goats. I couldn't be more excited about that (our house is on 36 acres with a loafing shed - we are ready for some livestock!).
And now for a few pictures.
Daisy (yes, the real Daisy) enjoyed the entire trip from Texas to Colorado: 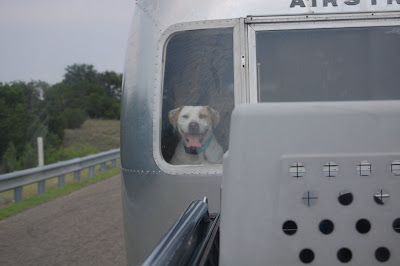 It has been storming constantly since we got here (looks awesome, huh?). I tell you, there is nothing like Colorado lightning. This is the view from our RV: 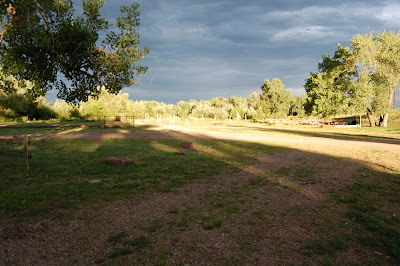 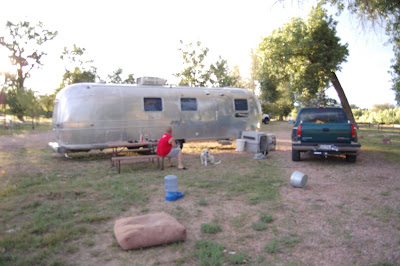 Ahhh...I love the pic of Daisy. I was looking forward to having her. Oh well, maybe some other time. Can't wait for some of the new place. Tuesday is almost here!! Love, Mom

Keep your chins up....it will only get better. A new adventure.
Dad

The picture of Daisy is great! I love the story about Tucker too. Carter has started calling all three of our dogs Bubba, our nickname for our dog Maddox.
Colorado lighting is amazing! Pretty soon you'll be in your home with your goats and chickens and look back on this trip and laugh. Although, the laughter may take a few years! :)

hugs, to you, my friend(s). WHAT an adventure!
Give Tucker a big hug, for me!

I know it must feel like a whirlwind now but in a few years you'll have LOTS of stories to tell and you won't be crying when you tell them. ;)