I'm usually against resolutions. I understand why people make them, but I've also had my fair share of failed resolutions, so I kind of gave up on them all together.
However, I'm giving resolutions another shot. Here's what I plan to change in the new year:
1. Less carbs. I've been reading that women (like myself) with PCOS see a decrease, if not total elimination of PCOS symptoms when following a carb controlled diet. This might be the key to my infertility - we'll see.
2. Handmade gifts. Over the last few years, I've developed a low tolerance for shopping malls. We went to one yesterday and I felt crazy! Talk about sensory overload! I've decided that gifts from me will be handmade this year, whether they're made by me or someone on etsy (check out my favorites - I've already been planning!).
3. Quit smoking. This one is the most difficult for me. I've done it a million times before, and it has sucked every time. I already know that if I were to get pregnant, I would quit immediately, but I also feel like I don't have the right to complain about being infertile if I'm going to continue to light up. This resolution is a maybe. But I'd for sure like to cut back.
What are your resolutions this year?
Posted by Erin at 11:05 AM 4 comments:

I got a text this morning before we were supposed to leave to pick up the baby:
Hey i am really sorry to do
this but this week came way to fast
i need more time.
and again i am so so sorry.
So there you go. No baby.
(I say, "No baby" rather than, "No baby right now" because I believe that every time we make arrangements, this will happen. I won't put myself or Scout through that. And I don't have that same I Know it in My Bones Feeling like I did with Tucker.)
Posted by Erin at 9:02 AM 7 comments:

I just stumbled upon the coolest artsy girl on Etsy...
How awesome are these? 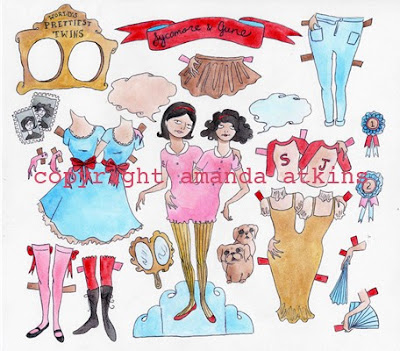 Definitely a different and creative take on paper dolls.
Go visit her shop (she has a lot of other great stuff, too).
Posted by Erin at 10:23 PM 1 comment:

On the Road Again

Scout and I are leaving tomorrow morning to pick up our new baby; we should be back on Monday evening!
My emotions are mixed: Excitement, anxiety, sorrow.
I've never thought to myself, "What would I do if I could no longer take care of my child?"
I am realizing more and more how fortunate I am. My husband would never allow a situation in which we would have to choose baby formula over bills. And if somehow we were sucked into a gigantic hole that we couldn't get out of, all four of my parents - my mom, stepmom, dad, and stepdad (plus Scout's parents) - would swoop in to help. I am certain that I would never have to face deciding whether I should give my child up for adoption due to finances. Some people can't say that.
And perhaps that is why I feel sorrowful. I am benefitting tremendously from someone else's misfortune. And it makes me terribly sad.
But other times, I am excited and happy. We're "having" another baby. And there's no better feeling than that.
Posted by Erin at 8:12 PM 2 comments: Remember When I Said,

"...unless another child drops from the sky like Tucker seemed to..."?
Well, it seems as if a child is dropping from the sky. We're just waiting to catch him.
I don't want to get into too many details, seeing as we haven't made arrangements to pick him up yet, but we're potentially becoming parents again before we knew it would even be possible. That's how it happened with Tucker, and that's the best, I think.
I had an appointment with a fertility doctor yesterday and cancelled it. Maybe part of it was fear. But mostly it was because I'm going to be a mommy again and I want to save all my excitement for this child.
He's nine months old - I guess I can divulge that much. We're so excited.
There's some financial stuff we need to figure out (it always comes down to money, no?). It's a combination of me making one-quarter what I was making last year and draining a majority of what used to be a beefy savings to move and buy our house. Money isn't flowing in like it used to, and there isn't much money saved to cover the adoption expenses.
My mom has graciously offered me the money for the upfront adoption expenses (thanks, mom!) but I'm doing what I can not to have to do that. It's time to get creative.
You might notice that on the right sidebar, there are some things for sale on My Etsy. Everything that I sell will directly go into an account that pays for our adoption lawyer. Right now, there isn't much listed, but I'll be using the days off from school to add as much as I can. If you love something on there and want to own it, you should feel good knowing that the money will go to (what I think is) a good cause.
Like I said, we're excited! I hope to have pictures of our new addition to the family later this week.
Posted by Erin at 10:04 AM 3 comments:

Blogging has been slow. With the holidays (and all things holiday-related that I pressure myself into doing), I haven't had much time.
But I've been elfed by my father. I promise it's the only time you'll ever see me break dancing.
And I have 17 days off from high-schoolers. I love them, but I also cherish my time away from them.
I hope you all are having a happy holiday season. I can't wait to show you what I got Scout. There's also a mysterious Nordstrom box under the tree with my name on it that I'm intrigued by. (My husband shops at Nordstrom all of a sudden? Who is this man?)
In other related Christmas news, I picked up a copy of The Autobiography of Santa Claus at my school library and I've been reading it with my friend's daughter every night. It's a gem. You know you're reading a good book when you can enjoy it as an adult, but it also makes an eight year-old giddy and curious. (Did you know that Santa prefers goat cheese to cookies?)
Posted by Erin at 12:27 PM 2 comments: 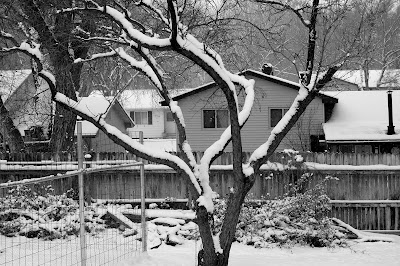 I called in sick today, partly because I just didn't feel like working, and partly because the roads are terrible today. So I'm sitting at home, enjoying the view and laughing at Tucker while he dips salami into the strawberry jam on his toast.
Oh, and I have a jillion things to do: Finish the quilt I'm making for my Secret Santa, House Guest Cleaning (which is much different and more involved than "regular" cleaning) in anticipation of my parents' arrival this weekend, and finding a pattern that meets my Cute Standard for Tucker's stocking (and then making the darn thing).
I love being sick. :)
Posted by Erin at 11:46 AM 3 comments:

Not Quite Candy Land... 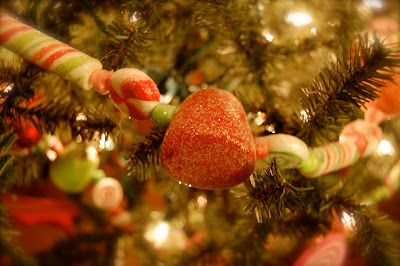 ...but it's getting there.
Do you have a theme for Christmas decorating? I'm curious to know what it is.
Posted by Erin at 11:24 AM 3 comments: 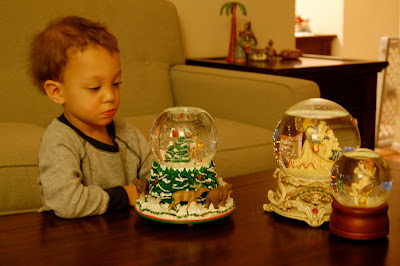