Please read: An open letter to the low-life that did this to his dog.

May the person who was cruel to this dog suffer a long, torturous death.

Warning: pictures are graphic.
Posted by Erin at 7:17 PM 1 comment:

I'm a huge fan of Pink. A couple of weeks ago, my sister put in a CD of her's that I hadn't heard yet. On it was a song called Dear Mr President.

The first time I heard it, it made me kind of angry. But then I just decided to listen to it without making judgements about Pink's political beliefs.

I came away with a few questions of my own - even though I thought the song was a bit misdirected. I don't know - the song makes me think - which in today's music industry is rare for me (well, listening to My Humps really changed my life as well. Yeah, not so much).

My favorite questions from the song:

And my least favorite:

How do you sleep while the rest of us cry?
How do you dream when a mother has no chance to say good-bye?
How do you walk with your held high?

I would really like to know what the rest of you think of this song. Seriously.
Posted by Erin at 1:26 PM 8 comments:

So The Girl got me thinking with a post she wrote last week.

The first line said, "Do you ever feel dumb?"

Umm, that would be a yes.

I don't generally consider myself a stupid person. In fact, many times I would rate myself smarter than most of the people I attend college with. (You would too if you entered your online classroom and saw other students typing things like, "I think NWA is a grate companie.")

In fact, an old friend of mine from high school looked me up and was surprised to hear that I hadn't graduated from college yet. He said, "Man, I thought you'd be a doctor by now or something!"

So anyway, I've been working at this veterinary clinic for a total of 12 days now. And I think it's safe to say that I've been categorized as The Stupid Girl.

I've been thrown in the mix of a crazy clinic with too many clients and not enough employees. Man, that makes for a fun time. In an average day I clean raunchy kennels, give food and water to pets that have spent the night, throw in a load of laundry here and there, wash dishes, take syringes apart, answer phones, show clients to the exam room, file charts, and assist with anything else that needs to be done (so essentially, I'm a grunt).

None of this stuff is mentally challenging. I mean, who can't effectively clean a kennel or wash dishes while thinking about a million different things at once?

Well the first day I worked there, a co-worker called me an idiot - right to my face. I can't even remember the context, but it felt awesome.

And then today, the same doctor handed me a chart and said, "Put this in slot five."

Yeah. Slot five. Ok. I had no idea what he was talking about, and when I asked him where "slot five" was, he shot me this You Have Got to be Kidding Me look. The same girl that called me an idiot looked over at the doctor and rolled her eyes. They seriously had a moment - an Oh.My.Gosh.Is She Really That Stupid? kind of moment.

I snapped, "I can only do what I've been told how to do. Where is slot five?"

I could go on for hours about the how many times I've been treated like a moron at this job. But it'll be over in a few weeks (18 work days, to be exact). Besides that, a lot of the instances I could talk about just aren't the same if you aren't there to witness it. 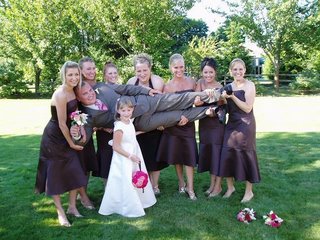 I've been looking at pictures from my sister's wedding, and I am officially The Fat Bridesmaid. So depressing. I look like the Incredible Hulk - minus the Incredible part of that equation (and I'm sure it doesn't help that all of my sister's friends are skinny and cute).

I've gained a good thirty pounds in the last few years. And I wasn't all that small to begin with.

So the other day, I drove my pudgy ass to Weight Watchers with my mom (after indulging one last time at Arby's, of course).

So naturally, the location had changed since the last time I joined. We spent twenty minutes driving around like tourists trying to find the place. No luck. But no worries - I was able to eat at Taco Bell the next day.

So now we've found out where it is, and we'll be going back this Tuesday.

The thing about my extra weight is that I don't want to see old friends. I'll be seeing quite a few of them on our drive to Texas, but I've actually thought about canceling our plans with them because I'm afraid that they'll snicker something after we've left like, "Man, did you see her ass? It's huge!"

I will never forget when America was changed by terrorist attacks on September 11th, 2001.

I was sleeping peacefully at my mom's house when she came into my room and hurriedly turned on the news and sternly told me to wake up. It didn't take long for my mood to turn from irritation to absolute rage as I watched the second plane crash into the World Trade Center.

I was glued to the television for hours that day. I couldn't get up; I was slowly realizing that this event would change my life forever.

Later that evening, I went to church. Later that month, I went to my local Army recruiter. I didn't know what I could do to make these monsters pay for what they did, but I knew I might get the chance as a United States soldier. But before my next appointment to sign papers at the recruiter's office, I started falling in love with Scout. I decided to support him in his career as a soldier rather than start my own.

So yesterday, I remembered September 11th, 2001. Although it was impossible for me to access the Internet in order to write this tribute, I took time to reflect on that horrific day.

More specifically, I remembered Garo H. Voskerijian, a man who was killed in the World Trade Center on the day of the attacks:

Friends described his marriage and family life as ideal, and described him as someone employees enjoyed working for. He was kind, uplifting, and happy. He played the role of Santa Claus every year at his childrens' school. One former co-worker described him as the "salt of the earth."

Reading one of his tributes really allowed me to see that Garo was a great man - someone I would have liked to know.

So today, Garo, I remember you. I honor your memory. I acknowledge the devastation your surviving family and friends must have felt on September 11th, 2001 - and the sadness I'm sure they still feel today.

May they find peace in the comfort of your memory.
Posted by Erin at 10:09 PM 1 comment:

My dear friend was kind enough to commemorate Scout's last moments in Germany. Here he is checking out his tickets before he boards the airplane. He's standing with his best buddy: 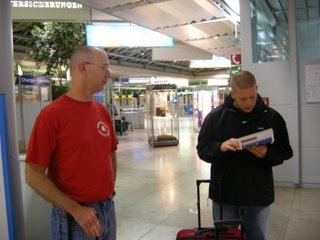 I just got a call from him, and he arrived safely in the states.

Celebrity deaths don't normally get to me like they may some people. But my heart sank when I read that Steve Irwin was dead.