Tucker is 12 months old. I can't believe it's been a year.

We had a pirate party to celebrate. I was getting the flu and my back ached that day, so I wasn't a happy camper. But Tucker and Butterball, his pirate princess, had a great time.

Are you kidding me with this stupid hat, mom? 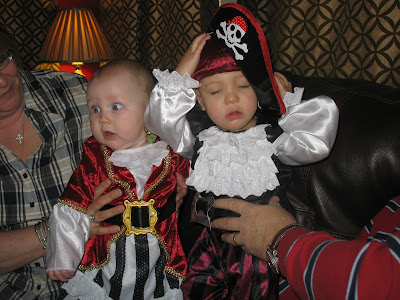 I'll never get tired of those big blue eyes. 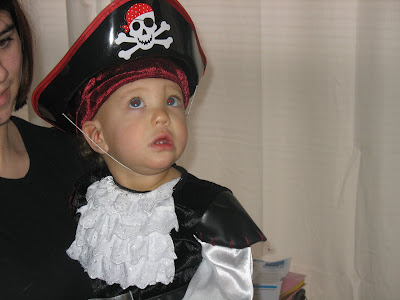 Butterball was ready to party! 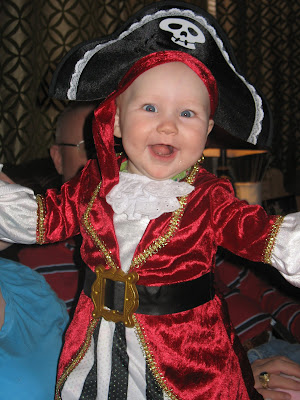 Even ABW's Jr. dressed the part! And he kept walking around saying, "ARRRH! I'm a pirate!" It was cute. 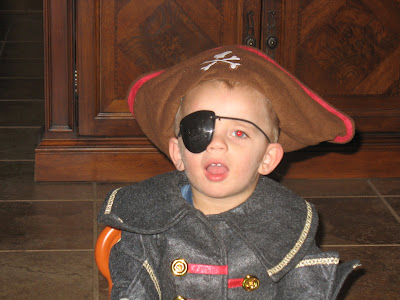 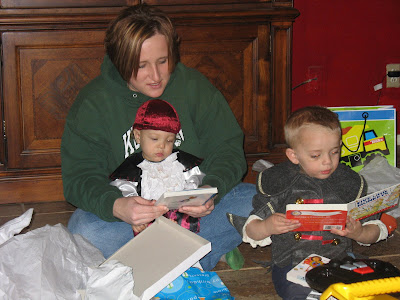 Someone Shoot the Crazy Out of Me.

I've seen this stray pitbull running through the neighborhood in which I work (calm down, haters. "Stray pitbull" does not necessarily equal danger). When I see him, it's usually about 7:28am and I have to be in at 7:30. I always weighed the choice of rescuing a dog and being late or keeping my job by being on time, although I promised myself that if I saw him in the afternoon I would surely stop and call animal control.

Well, today we were off work for MLK Day and I had to drive through the same neighborhood to get to a friend's house who had invited me and Tucker over for coffee. It was strange, because I started thinking about the dog as I drove past the school. And then, out of nowhere, he darted in front of my truck and booked it to an open field. I pulled my truck over and started to whistle. The funny thing is, he came. (I seriously had my doubts that he would.)

He was scared, hungry, and skinny as could be. He cowered over to me with his tail wagging between his legs and I noticed that he was still young - maybe less than a year old. Since I didn't have animal control's number, I stuck him in the truck and headed back to my house with him. Tucker squealed with excitement. The dog gave him a courteous sniff and wag of the tail.

He sat there in the passenger seat, a little scared but calm, and the mile-long drive back to my house went a little like this:

Me: What am I going to do with you, big boy? I can't take you to the no-kill shelter; there's never any space. And you'll surely be euthanized if I take you to the other-already-overcrowded-with-pitbulls shelter. Scout's gonna kill me; we can't keep you! But you're so good. And you need food. And what's one more dog when you already have five? Oh, man. What have I done? I guess we'll see what Scout says when he calls.

So Scout called. And the conversation went a little like this.

My husband has become a big fat softy - just as crazy as I am. I will no longer shoulder all the blame!

So we present you with Diesel: 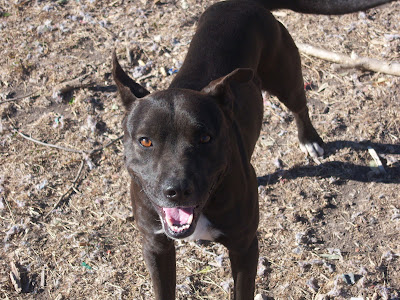 He looks a little intimidating in this picture, but I assure you that he prances around like a happy dog and leans up against me whenever he can. He's a sweetheart, really.
Posted by Erin at 4:44 PM

I'm starting a scrapbook for Tucker. Yeah, I'm a little late. But Scout and I decided that we would write him love notes so when he's older, he can look through his scrapbook and see how we longed for him, how we waited for him. And how no other child on the planet could have been more loved than him.

I have fallen in love twice in my life.

The first time was when I wasn’t expecting it, I felt undeserving of it, and I had given up on it. Your father, a man whose qualities and character cannot be defined by words, chose me. And I chose him back.

The second time I fell in love was with you – a tiny little boy whom we so desperately wanted. A little boy whom we waited for, often times impatiently. I knew that the universe was exactly as it should be the first time I held you.

Until the day you were born, I had never known anything to be true down in my core, in my bones. But I now know that since the beginning of time, the plan was for you to be our child. I was created to be your mother. And you were created to be my son. Someday, I hope you experience at least one thing you know to be true, straight down to the marrow of your bones, just like I know this to be true.

My lack of imagination diminished a few days after you were born. Almost involuntarily, my brain started planning the fate of whoever might try to hurt you. My imagination ran wild with images of My Kind of Justice. I knew that person would suffer a far worse consequence at my hands than in any prison.

I love you, Tucker. And my love for you will never be conditional upon the types of things you accomplish or the mistakes you make. I love you because you are mine. And that’s for always. 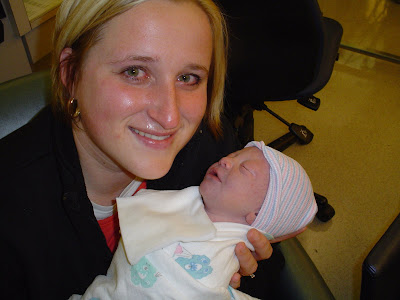 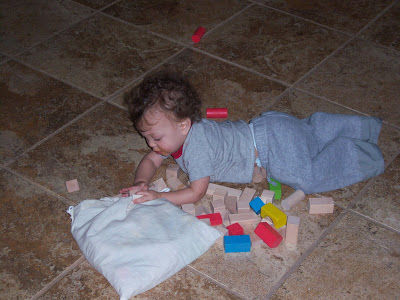 In my efforts to organize my unorganizable house today, I came across a blank disc that I don't remember ever seeing. When I popped it into my computer, I was pleasantly surprised to see grainy, disposable camera photos of our wedding.

We just celebrated our sixth wedding anniversary this month. It's kind of fun to look back and see photos of friends we barely talk to, and to see the hope and the joy in my face. I still remember thinking how I knew Scout and I would get through anything together. And I was right.

One of my best friends, Beth, and my little sis, Meg. Eating Quiznos?: 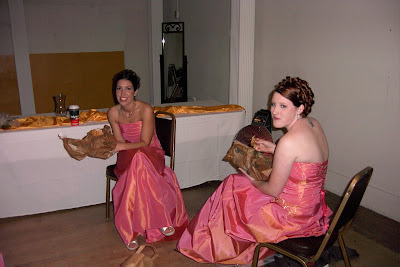 I loved the centerpieces. Hated the planning of mundane details (in fact, I seriously bailed out of the planning in the last month. I waved my hands about and said, "Mom! I can't take it anymore!" You choose!"), but I loved how most of it turned out: 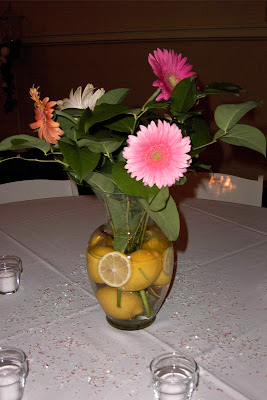 Loved my bouquet too: 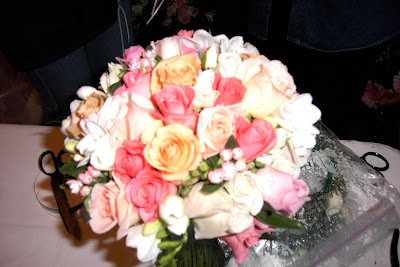 My bridal party, morning of. They were such good sports: 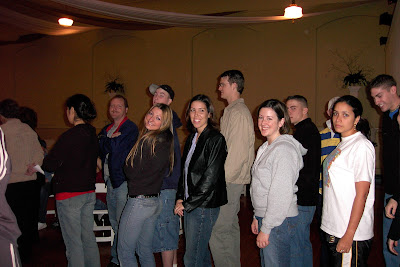 Meg, again. With our dad, who has a surprisingly mysterious look on his face. I'm sure I don't have to add that this was the morning of the wedding, before either one of them got ready. Duh: 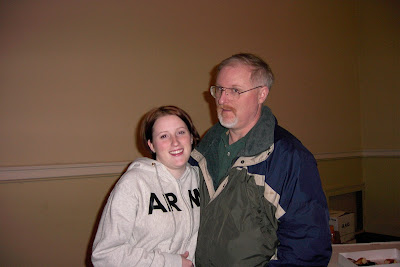 My flower girls (aren't they lovely?): 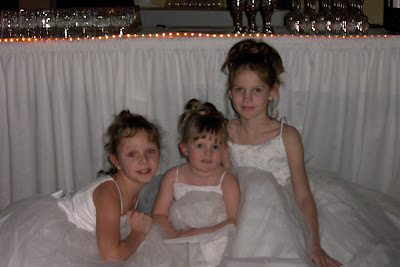 Some guy in Scout's unit at the time, paying my grandfather to dance with me. I kept overhearing him say things like, "I'm Bank of America, son. Pay up." I love him: 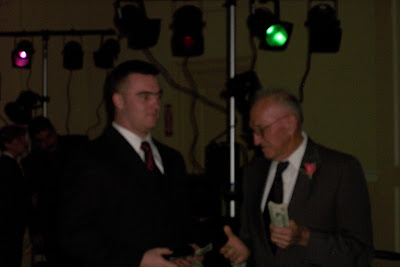 Again, grainy photos. But this one is of one of my favorite people from high school, who I swear is one of the funniest people ever. Can't tell from my facial expression, can ya?: 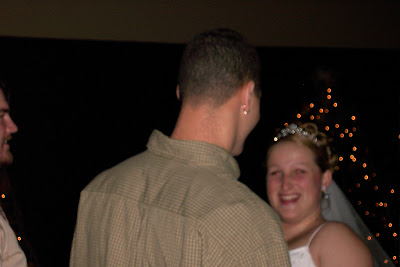 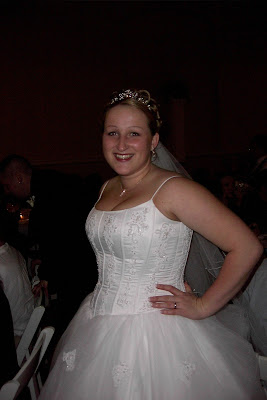 Two of my best friends from high school, Em and Anneka: 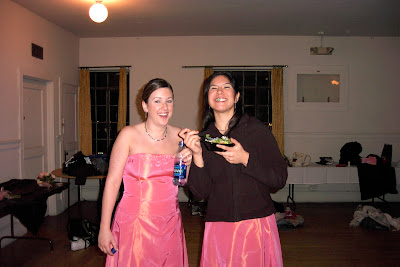 Again, scroll down. There are a couple more.
Posted by Erin at 6:04 AM 1 comment:

My Columbian sister, Alejandra, with my Momma: 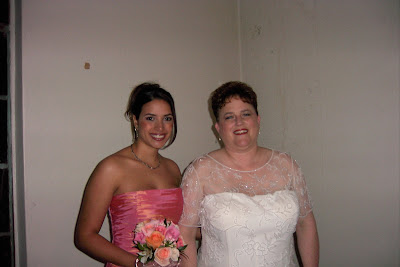 And Scout. Doing what men do: 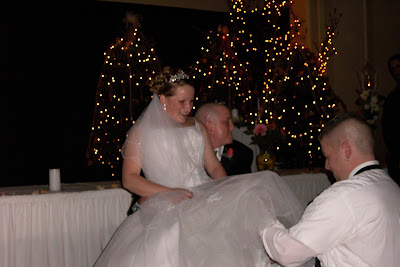 Whenever I hear people say, "Oh, I wish I had a big wedding", my knee jerk reaction is to reply with, "Umm. Big weddings are a pain in the ass." But I realize I can say that because I actually had what little girls dream of for a wedding day. And when I look back at pictures, all the hooplah and mundane details were worth it.

Being alone sucks the life out of me. I've missed Scout every second that he's been gone. And the comments are getting to me: "Oh, you only have three months of the deployment left? That's not bad!".

Yeah, dickhead. You've never spent the weekend away from your spouse. Fuck you.

This year has been a year of realization - I've had to say good bye to a friend I thought I'd have until I was sitting in a wheelchair sucking air out of an oxygen tank and eating cafeteria food at a nursing home. Realization is a bitch.

And my job is hard. I mean harder than anything I've ever had to do. There are expectations from parents, students, other teachers, administrators, program coordinators and so on. I always feel like I'm on the brink of drowning. I turn my lesson plans in at the very last minute I can. I have very little patience with my students. I have missed homework assignments (that I'm not allowed to make up) for my teacher certification program. And that's so NOT me.

My house is a disaster. I never thought I'd be the person that hires someone to clean my house. But yeah, that is now who I am - the girl who pays someone to mop so that she can have five minutes to herself every once in a while.

Other things, well. You know I pretty much let it all hang out, but some of the events of 2008 are just things that I don't feel like I could really blog about. Uncomfortable, bittering things that I cannot even begin to wrap my brain around - much less write about. That's not me trying to be mysterious. That's me saying 2008 has SUCKED ASS!

Now that you're all thoroughly depressed, I'll share some loveliness that only my sweet Tucker (my ray of sunshine in the thunderstorm that was 2008) can provide.

This was a few months ago. He loves to pretend that he's driving. And he'll scream. Every. Single. Time. We. Get. In. The. Truck. Until I let him "drive": 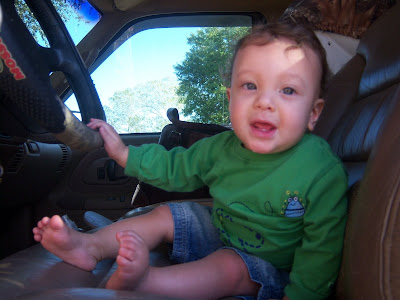 Quite possibly one of my favorite pictures ever: 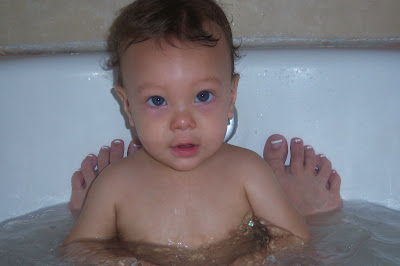 Playing with the letters that Grandma Seattle got him for Christmas: 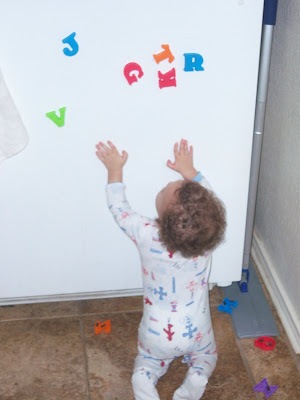 I was trying to get the perfect pirate picture for birthday invitations (can you believe he's almost a year old?) after he ripped off the stick-on eye patch and we took away the bottle of scotch. It definitely doesn't have the same effect. But he's still freakin' cute: 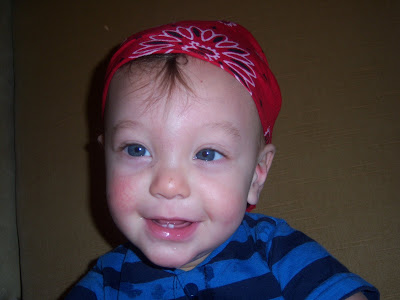 And here's the most recent picture - he's playing with his Christmas loot in his "Santa's little helper" outfit: 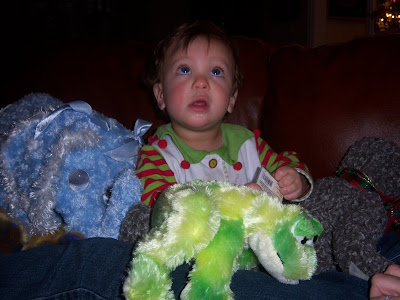